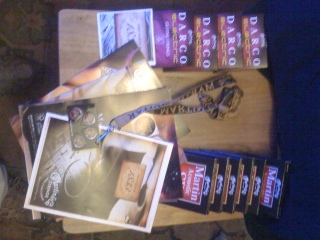 I started following Martin Guitars UK on Twitter ( @MartinGuitarUK ) not too long ago – they’d just added a UK feed. They ran a little competition and I was fortunate enough to be selected as the winner! While a nice Martin Eric Clapton or John Mayer model would have been lovely, I really didn’t know what to expect as a prize, but was impressed when they asked my what string gauges I use for acoustic and electric guitars.

So less than a week after winning, the UPS guy brought a fairly large box to the house – not big enough for a guitar, but bigger than the size of a few packs of strings.
Inside the box was the actual Swag Bag itself
and inside the bag were:
A Martin Lifespan guitar string t-shirt – it actually fits!

A Martin lanyard, with a Pik-Card with 4 press-out Martin guitar picks

A copy of their current Martin owner’s magazine
An assortment of brochures and leaflets about their Performing Artist range
A sticker for my guitar case.
I was, and am, highly impressed – thanks guys!

I’m not sure I would appreciate having this in my lounge holding my guitars – but a cool idea anyway – for the music room I’ll have one day, I guess! Who might I have instead of John Fahey? Well, Lowell or Jerry perhaps.

Dion – Tank Full Of Blues
Charlie Parr – I Dreamed I Saw Jesse James Last Night
Otis Taylor – Your 10 Dollar Bill
Ori Naftaly – Devil Red Blues
Layla Zoe – Black Oil
Cherry Lee Mewis – On Loan
Mac n Dekker – This Ain’t Another Blues Song
Alabama Shakes – Heavy Chevy
King King – Mr. Highway Man
Guy Tortora – Willie Dixon
Roscoe Levee – Never Stops
Layla Zoe – Singing My Blues
Henrik Freischlader – Got It Made
The Harpoonist & Axe Murderer – Mellow Down Easy
Mick Simpson – The Road To Memphis
Cherry Lee Mewis – Goin Down (To Memphis Tennessee)
Nico Wayne Toussaint – She Comes And Go
Blind Willie McTell – Death Room Blues
Mojo Morgan – Dry Whisky Drinker
BabaJack – The Money’s All Gone
Lost Tone – The Soul of A Man
Special Preserve – Let’s Go To Bed For A Week
The Right Now – Half As Much
Broken Wing – Rock The World
Here is the webpage that has videos for the runners up in this year’s New Brunswick Battle Of The Blues. You have until the end of February to rate the videos and give one of these acts the a place in the final, at The Garage, Highbury, on March 27th.
When you vote you MUST click on whatever number of stars you want to give that act. If all you do is click on ‘Rate’ you give no stars.
Please view each video, and then vote for the score that you feel each act should receive. The final voting date is 28th February after which no further votes will count. There were some issues recording some of the acts – mainly due to the different equipment and lighting at each venue so you might have to crank up the volume on your speakers.
Last year’s final was excellent, and the winners of that final, 24 Pesos, will be headlining the final this year.


Here’s a video with some snippets from their trip to the Harvest Jazz & Blues Festival last year – their prize as winners!

I have to admit, I love The Dead, but at times I can barely tolerate Dylan. There – I’ve said it! Don’t get me wrong, as a songwriter I think he is superb, but I’ve almost always been disappointed by his performance on record. I’ve only seen him play live once – St. James Park, Newcastle upon Tyne, and while I enjoyed that gig it had more to do with the fact that I got in for free, and that Mick Taylor was playing guitar.
Conversely, however, unlike most DeadHeads, I really like the Dylan & The Dead CD that came out some years ago, and I always love The Dead’s/JGB/Phil Lesh’s/Bob Weir’s take on Dylan songs.

Howard Weiner has spent 300 nights with Dylan & The Dead, and has a book to prove it, whereas, including the Dylan gig mentioned above, I only have 3 nights experience to draw on (2 Dead gigs). I haven’t read the book, but I would be very interested in taking a look at what Howard has to say. If you’re a fan of Dylan or the Dead, you might be interested too.

I recently became aware of Ben Smith via twitter, and it turns out we play similar types of music, and to me, our voices are similar too. It would be great to do some gigs with Ben at some point in the future.
In the meantime, here’s some of the tasty guitars and stuff that Ben uses  – I posted the piece on Rees guitars after seeing them on Ben’s site – Ben has a couple of them.

Ben says: ” It has a chambered Korina body and a flame Maple top that is only attached to the rest of the body around the edge and under the bridge, where I think there may be a small lump of mahogany, although I’m not 100% sure about that.  It also has some holes in the back that were part of an experiment Clive did on it.  It has a Maple neck and fingerboard, a double truss rod and a fender roller nut, which I like as it’s great for behind the nut bends. At the other end there’s a Gotoh wrap around bridge.  For the electrics, it has a Seymour Duncan Jazz humbucker at the neck and a JB humbucker at the bridge.  These are controlled with a 5 way switch, as well as a coil tap switch and a phase switch, which puts half of the neck pickup out of phase with the rest of the coils, and that gives me a total of 12 different pickup settings. It has bags of sustain, and responds really well to the touch.”

Ben’s other Rees is a Rambler – a travel electric guitar. He says: “While I was planning a long  trip to the U.S, I spoke to Clive about building a pro quality guitar with a full size neck that was small enough to fit into an ovehead locker on a plane, and he came up with the Rambler.  It has a solid Korina body, a dual truss rod neck with a roller nut, 2 Seymour Duncan P90s, master volume and tone controls, and a 4 position selector switch.  It gets some funny looks because of it’s size, but it’s a serious instrument, with a great sound and feel.”

Ben plays a Taylor acoustic fitted with his own concoction of transducers and more: “For live playing with the Taylor I have a Fishman Rare Earth active humbucker that goes in the sound hole.  Like every magnetic acoustic pickup I’ve tried it sounds horrible on its own, so after I got it I attached an old AKG lapel mic to it and used to use both the pickup and the mic to try and get a sound that is vaguely like an acoustic guitar.  Although this got me a pretty good sound, it depended heavily on having a good sound engineer and used up 2 channels on the desk, so wasn’t hugely practical.  I started experimenting with piezo disc transducers on the inside of the guitar, near the bridge plate, and found that 3 of these on the inside combined with a bit of the magnetic pickup sounded pretty good – as good as the mic and pickup blended, but without quite as much feedback trouble, and without the need for phantom power.  I wanted to make the system as easy to use as possible, and looked at all sorts of preamps and other bits, but thought I might have a go at making one myself, as I didn’t need all of the bells and whistles that were generally on the available ones, and also, it would be a lot cheaper, which is nice too.  I installed the transducers and the fishman with a stereo endpin jack, which I run to a simple 2 input box with a buffer for the piezos and a blend knob for the 2 input signals.  This then goes to an eq pedal, and the system seems to work pretty well, so far…”

I’ve left a few day’s since the last contest, to give folks a chance to come back afresh!
Today is the final day of our Guitar Master Class subscription giveaway. Guitar Master Class provides resources for all levels of blues guitarist: blues scale guitar lessons for the beginners and Jimi Hendrix style guitar lessons for the more advanced blues players.
And to win all you need to answer this Thumbrella trivia question: way back in December 2008 I featured, on The Blues Show, an interview with an American musician – a member of Little Feat. Who was that interview with? Just email the answer to me; garygrainger@gmail.com. The winner is the first person to answer the question correctly.

The early mornings and restricted diet are enough to put most people off running a marathon. But what if you had to learn how to run again, barefoot-style? That’s the challenge local lad Liam Ward is setting himself in the lead up to the Greater Manchester Marathon.
Liam, 23, works as a care assistant in Whalley Range, but on 29th April he will be donning his shorts and – crucially – his “barefoot” shoes and running 26.2 miles to raise money for The Stroke Association.
“When it came to my first training run, I realised I didn’t have any running shoes” says Liam. “I decided to give it a go in my barefoot shoes, and it’s just stuck”. Liam wears Vivobarefoot shoes, designed to allow the feet to move as if barefoot, with no ankle support and only a thin puncture-resistant sole for protection.
This means learning to plant the ball of the foot, not the heel, as is the more common technique. The hard work will all be worthwhile for Liam if he succeeds in raising £2,000 for The Stroke Association. Liam’s dad, Stephen, had a severe stroke at the age of 48, which left him without the use of his right side, and needing daily care, until his death at the age of 52.
“My sisters and I were still at school when dad had the stroke,” Liam explains. “We didn’t know anything about stroke or what it would mean for us day-to-day.


“The Stroke Association provided us with amazing support and advice at a really tough time for us. They also fund pioneering research into stroke prevention, so hopefully others won’t have to go through what we did”.


“I ran a half-marathon for the charity in 2009, but this time it’s twice the distance and twice the pain. And of course, this time I’m running barefoot-style. The first time I tried running with the new technique, I couldn’t walk for a week after.”


As well as being part of a local Sunday league team, Liam plays harmonica in a blues band, and is hoping to put together a fundraising gig to help him on his way to that £1,000 target.
“I’m sure the lads at football and in the band will chip in if they have any spare cash after all the beer,” said Liam. “Every penny counts, and means that The Stroke Association can continue providing much-needed support and funding innovative research”.


You can sponsor Liam by visiting his online fundraising page on www.justgiving.com/Liam-Ward. You can pay by credit or debit card, and the money will go directly to The Stroke Association. Where supporters are UK taxpayers, the charity will automatically receive 28% extra in Gift Aid
Liam will also be posting training updates on his blog at www.gobironward.com.

I came across these guitars on the site of Ben Smith (I’ll feature Ben’s gear page soon) and there are some interesting shapes, styles, switching and control set-ups and designs here – and at prices that are very attractive too.
Ben very ably demonstrates switching features on one of the guitars here