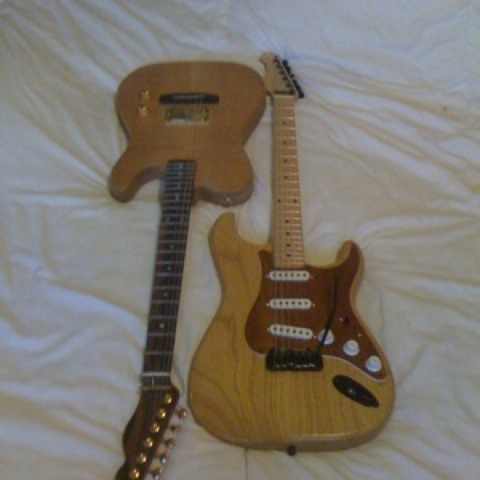 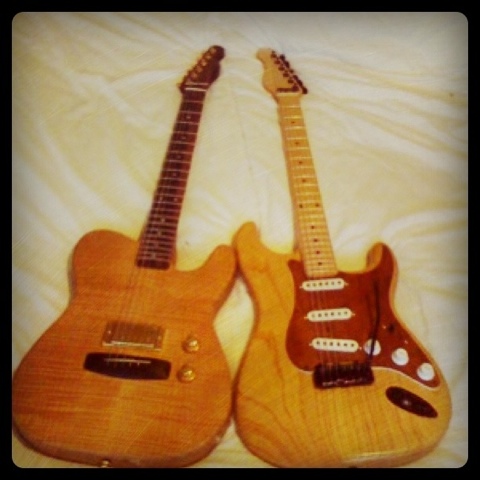 My good friend Simon Raw, of The Raw Guitar Company, having already gifted me the wonderful Telecaster here, surprised me even more last weekend. I’d taken the Tele for some minor adjustments to my local guitar shop Ron’s Music. Simon told me he had a strat at home “gathering dust” and he’d rather I looked after it. I presumed that he meant simply as a loan until I got my Telecaster back. But, no. When my wife & I met Simon & his son in our usual rendezvous point, Starbucks, he handed me the guitar and said something like: “this is your guitar now,  I only want to see it when you’re playing it at a gig.” Once more, I was totally gobsmacked by Simon’s generosity – and I still am.
The guitar has had several styles in its short life – active EMGs, a standard strat neck, a telecaster neck, and more, But it has now found its true form as a blues baby – the pickups and the woods combine to give a superb Texas Blues sound – even in my fumbling digits. I can’t wait to try this out in anger! 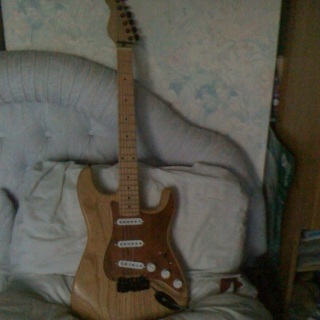 I haven’t quite got to grips with my stompboard that I posted about a while ago – but here is another twist on the same idea, for those folks who are rhythmically better coordinated than I am!

As the name implies, the Tambo Toe is a tambourine for your, er, toes!
It certainly seems pretty effective in adding a little something else to an acoustic guitar performance.

It isn’t too expensive either – I wouldn’t mind giving one a shot!

Tom is a great performer and a very nice guy too.
He was very well received by the knowledgeable crowd at the club, where he supported 24 Pesos.
There are 3 more videos of Tom’s set at my YouTube channel.

I’ve been meeting up with guitar designer Simon Raw for almost 2 months now, I guess. We share 3 common interests: The Blues, Guitars & Coffee. We regularly meet in Starbucks in Darlington while Simon shows me his latest guitar designs and I try not to drool on his laptop! Last week I tweeted randomly – “Could do with a new guitar” or some such thing. Imagine my surprise when Simon responded that he had a guitar that might just be for me. He went on to decribe a wonderful guitar – Les Paul shaped and hybrid (acoustic pickup and a humbucker) He sent me pictures and I dreamed of owning that guitar. Then, after some clarification, Simon said that he wanted me to have the guitar. Have the guitar. For Free!

I was gobsmacked and we arranged a meet up at our regular haunt. I could barely contain myself as the hour approached and my wife and I settled in some comfy seats at Starbucks. I was in the queue ordering Simon a coffee when he came in, so I beckoned him to sit with my wife. I could see that he had a guitar with him, but couldn’t see any details. As I returned to our seats, Simon said “I hope you won’t feel too disappointed, but when I went to collect the guitar I was going to give you, I was told that somebody wanted to buy it. So I’ve brought you this one instead” and revealed the Telecaster you see here. I was even more gobsmacked, as Simon had remembered from a previous conversation that I was really a Tele lover, and mourned the sale of my last guitar, an ESP Tele. So, I repeat – Simon gave me the guitar! As a gift! I was speechless in Starbucks! We gathered a small crowd of youngsters as I lost myself in the beauty of the beast and picked a few chords and riffs. The guitar is wonderful, and I am in deep gratitude to Simon.

The body is made from Basswood with book matched Flame Maple top and was made by Neil Shoemark who works near Glastonbury – Neil makes fantastic guitar bodies to order.
The neck and fretboard is made from Ebony and is fitted with Gotoh 510 tuners and was bought direct from US licensed Fender dealer, Musikraft, who are based in New Jersey and Jim Fleeting did the techie bits. The acoustic bridge has a Fishman piezo ceramic pickup underneath it, for acoustic sounds, and the humbucker is a Seymour Duncan Jeff Beck model. The controls are concentric volume and tone for each pickup. At the moment the Fishman isn’t working and I suspect a wiring fault, which I’ll get sorted very soon. But the guitar feels great, a nice action to allow me to fingerpick when I get the pickup working, but also low enough for the small amount of bending that I do when playing electric. The humbucker sounds wonderful – beefy , singing and glorious. When both pickups are working I’ll post some audio files. I can’t wait to try this out with a band – I guess I’ll need to sit in on a few gigs!

Introduction
Last month I invited onto my Blues Show guitar designer, Simon Raw, who apart from choosing some great blues tracks spoke at length about his passion for guitar design & the blues in general. You can hear that show here. Simon is based in Ripon & earlier this year he created a company called The Raw Guitar Company in order to showcase his talent as a designer.

Background
Simon’s story started twenty years ago while he was attending De Montfort University in Leicester. Simon first became interested in guitar design while completing his higher degree in product design engineering, but his guitar ideas were put on hold while he earned a living. After graduating from De Montfort he undertook a M.Sc. at Loughborough University where he studied ergonomics & went straight into ergonomics consultancy, specialising in helping power tool manufacturers reduce noise & vibration in their products. Over the next 18 years Simon steadily built his reputation as one of the United Kingdom’s leading experts in noise & vibration attenuation, & started his own consultancy, Ergonomically Yours Ltd. in 2001. This move meant that he could set his own agenda, & allowed him to follow his wish to move into automotive design & offer potential clients product design engineering and ergonomics expertise. Consequently, his clients have included Bentley Motorcars, Caterpillar, Cummins Engine Group, Rolls-Royce Motorcars, and Triumph Motorcycles.

To bring our story up to date, in January 2008 Simon, while rummaging through his office stationery cupboard, stumbled upon a file which contained sketches & scribbles from his student days, & one sketch illustrated a design for an electric guitar that had an acoustic style bridge and a single humbucking magnetic pickup. Simon happily took it home to show his son, Ben, who, as a budding guitar player, was immediately impressed.  He consequently showed the drawing to his friends which quickly brought feedback that if the guitar was commercially available then they would all like one. This unexpected response got Simon thinking, so he started to detail his idea further  – in the twenty years from his initial sketch, guitar technology had moved on, especially in pickup design.

His next step was to make the guitar and have it reviewed by guitar players & industry movers and shakers. Billy Penn from 300guitars.com described the guitar as “awesome, really, really nice” and Gavin Wilson from guitarz.blogspot.com said simply “ it looks fantastic, job well done”.
This is a great guitar. I know it’s a great guitar because I now own it! (Post to come soon!). Thrilled with the response the guitar was having he decided to experiment, design & create further guitars. So, over the next eighteen months & with help from local luthier & friend, Jim Fleeting, Simon drew upon his experience and knowledge in design, ergonomics, noise & vibration, to formulate ideas for creating further guitars that would appeal to guitarists who require that little bit more from their instruments.

Rather than simply designing & creating one-off instruments Simon wanted to create a range of guitars that had a particular theme running through them. He greatly admires how Chris Rea utilises creative platforms other than his music for expressing his talent, for example, film, writing and painting. Back in 2006 Rea released his stunning “Blue Guitars” multi media box set documenting his love of the Blues & the Bluesmen that have inspired him over the years. For those of you who are not familiar with this work, Rea wrote & recorded various CDs that “painted” & “documented” the Blues in all it’s colours, for example, Chicago Blues, Electric Memphis Blues, Texas Blues, Louisiana & New Orleans Blues where each album is a piece of work in its own right. Inspired by Rea’s ability to write musical stories that historically documents the development of the Blues from the early beginnings to the ’60s and ‘70s Simon thought why not try & do the same with guitar design. Therefore, over the past year he has designed a “Back Catalogue” that starts in 1938 with “The Hellhound”, a guitar Simon “designed” for Robert Johnson & concludes in 1975 with the design of “The Blues Imperial”, a guitar that simply has “Chicago Electric Blues” stamped all over it. In between there are guitars called “The ’48 Broom Duster”, “The ’55 Revelator”, “The ’57 Nighthawk”, “The ’63 Carousel”, “The ’66 Thunderstick” and more besides.
I have had the pleasure of seeing how Simon’s designs have developed over the past few months. He has produced a collection that any guitarist would love to own. His designs don’t just look fantastic, they sound fantastic too because he uses Jason Lollar pickups including his very own custom pickup that Jason designed and built specifically for Simon’s mid 1950s to late 1960s guitar designs. I had the chance to play this guitar on the Blues Show when Simon visited the studio.

For his 1930s guitars Simon commissioned Bob G. Harrison to create a pickup that not only captures the sound of the late 1930s but aesthetically, and in words of Bob himself, “Will have a flavour of something that a good old southern farm boy hand made in his shop”.

I am delighted to announce that Simon will officially be launching his company & unveiling three of his guitars at Musikmesse 2012 in Frankfurt next March, namely: “The ’48 Broom Duster”, ”The ’57 Nighthawk” & “The ’71 Skinny”, a guitar that he has designed and built for Ian Siegal. If you would like to see these guitars you will have to wait until they are unveiled at Frankfurt. If you can’t wait until March, just to give you a flavour of what Simon has designed he has very kindly allowed me to unveil for the first time “The ‘39 Mississippi Boweavil”, a guitar Simon has “designed” for Charlie Patton, “The ’63 Carousel”, a guitar that he has dedicated to Sid Watkins and Henry Weill and “The ’69 Hound Dog”, a tribute guitar that he has dedicated to Hound Dog Taylor and The Tokyo Electric Instrument & Sound Company. If you would like to know a little more about Simon’s work and his debut at Musikmesse 2012 go to Simon’s website or visit his Facebook page.

I wish Simon every success with his venture and look forward to setting sight on these guitars.