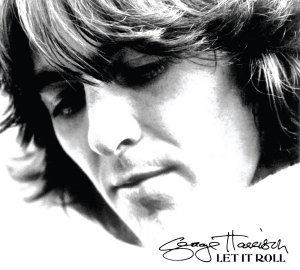 (Disclosure: I got this CD for free)

There are 3 or 4 people who I would say influenced me to take up playing the guitar. George Harrison was one of them – the first LP record that I was bought was “With The Beatles” and I’ve wanted to be George ever since. This week sees the release of this remastered compilation “Let It Roll”, which brings together 19 tracks from George’s solo career.

From the first track “Got My Mind Set On You” I’m reminded of how good a songwriter George was – he might have been overlooked in The Beatles despite writing some sublime songs, but this song and many others here show that George had a great ear for songs and arrangements that would be good to listen to. And from this first track, all of the way through the collection, there is George’s slide guitar – something else that inspired me and which was overlooked in The Beatles. The sound here, remastered, is very crisp and very “modern” – maybe they should release this track as a single.

I’m not going to write about every song here – they’re all great – but other highlights for me include “Give Me Love” – more slide and a good bass line add to this song’s many attractions.

“My Sweet Lord” is here too of course, sounding great through the headphones with all kinds of stuff in the mix that I hadn’t heard before – autoharp? When I was in March Hare in 1972/73 we covered this song and segued it into Edwin Hawkins’ “Oh Happy Day” but our version sounded nothing like this!

There are 3 tracks here from the Concert For Bangladesh live album. “While My Guitar Gently Weeps” isn’t the best version of this song but it features George’s long time friend Eric Clapton on guitar. Other tracks from that album are: “Something” – a stunning song in anybody’s world, I suggest; and “Here Comes The Sun” perfectly executed and a version that puts to shame the thousands of versions sung at parties and get-togethers – mine included, of course!

“Any Road” reminds me of the Grateful Dead’s “So Many Roads” in sentiment, if not in musical arrangement – an uplifting song which I really like.

“All Those Years Ago”, which got to Number 2 in the Billboard 100 US charts, is George’s tribute to his murdered Beatle friend John Lennon; it is very uptempo and lively – a celebration of John’s life rather than a mawkish memorial and features the remaining Beatles on vocals and drums.

“Marwa Blues” is an instrumental that I hadn’t heard before – it features George’s slide guitar, of course, and is a beautiful piece of music, one I’ll listen to over and over again.

“What Is Life” again shows George’s ear for a great pop song – a catchy hook, great arrangements and a chorus that I just have to sing along with.

“When We Was Fab” takes a wry look at the days of The Beatles and sounds very Beatlesque too – great stuff!

It is obvious from many of these tracks that George had a major part to play in the Travelling Wilburys too – he put them together to record one song “Handle With Care” as a b-side to a single, but they ended up recording the whole first album in 2 weeks and went on to have great success – many of the tracks here have the same style, sound and arrangment techniques as those that the Wilbury’s recorded.

This collection has reminded me how much I love George Harrison’s music, how much influence he has had on my own musical style (harmonies, slide guitar & more) and how important a songwriter and performer he was in his own right. Do yourself a favour – even if you don’t know who The Beatles were, if you like good music, give this album a chance.

I like it so much that, even though I got this advance copy for free, I’m going to buy the retail version to get the in-depth booklet and pictures that come with the package. I hope you’ll do the same.

There’s an e-card here and a good video interview (EPK Video) with Harrison’s widow, Olivia, on the Let It Roll microsite here and you can buy the album here, as well as at iTunes where there is an unreleased bonus track.

Here’s some links to some of the songs from the album:

This site uses Akismet to reduce spam. Learn how your comment data is processed.