Park Head Open Mic (PHOM) happened for the first time last Friday 24th April. It was well attended – around 40 folks there enjoying some great music by about 13 sets of performers. It was such a hit that the landlords have given us a bigger room for the next session on June 5th – we’re already looking forward to it! Photo of the wonderful Rebekah Findlay by Filmar Photography. A write up here and more photographs here.

(The photographs are copyright Jo Collinson)

A few years ago I posted a short piece about Gordon Huntley (page now here, I think) – the pedal steel player with Matthew’s Southern Comfort. A few weeks ago I had an email from Jo Collinson, telling me that she and her husband Ted used to be in a band with Gordon in the early sixties. She was kind enough to share these photographs with me (Jo, Ted & Gordon with unknown bass player in the bottom pic, Gordon at a fancy dress party in the top pic) and some stories too. Jo said:

“Hi there I was just going through looking for Gordon and found your Blog thing and thought you would be interested to know that Gordon played with our band in the 60’s! What a character he was! We did a couple of broadcasts with him – dont laugh, Workers Playtime. Our band was Midnite Ramblers but at the time of the broadcasts from Bristol we were The Red River Group from the Salisbury area and played at most of the American Airbases around.

My husband Ted and I, Jo Collinson, formed the band – a Skiffle Group – in 1959, but when Gordon joined us we went from strength to strength – it was a wonderful experience. We first met him when he popped his head round the door when we were playing at a pub at a little village, The Boot at Vernham Dean. “I heard there was some country music here can I sit in, Pedal steel guitar?” He came in and fixed up this THING and said: “What shall we play?” I said “Cheating Heart?” “O.K shall I bring it in?” These were all new words to us – “sit in” and “bring it in” – we were only 3 chord trickers – “Worried Man”, “Railroad Bill” type. SOOOOOO he brought it in!!

Oh what a sound, we just stood and stared at him, these big hands playing this HEAVENLY music. He played with us whenever he could as he was with another band but he liked our singing and we progressed to “Heard The Blue Bird Sing” The Louvin Brothers and all new artists that he brought into our house – he was an amazing lovely man, unforgettable.

Years later I had the Melody Maker with me on night duty and found a letter from somebody asking about tuning steel guitars and the answer was from Gordon, I wrote to him and we had a long chat on the phone, he remembering my curry – (all ready at all times of the night returning from gigs) and hoped to get together, but sadly it was not to be as he died before this happened. I have rambled on a bit haven’t I? But all my stories of Gordon are not short ones!”

I find Jo’s stories very interesting and hope that she’ll share some more, not just of playing with Gordon Huntley (colour me jealous!) but of other adventures playing music in the early sixties.

We had a return visit from Nige & Bob of the Poorboys – some excellent music! I’ll post the individual songs soon, but here’s the links to the whole show – part one:

Blind Lemon Pledge – I Killed The King of The Blues

Marcus Bonfanti – Knock me Down

John Martyn – May You never

Big Joe Williams – She Left Me A Mule

Janiva Magness – That’s What Love Will Make You Do

John Hiatt – Ridin’ With The King

Mark Easton – Money Is The Root Of All Evil

Here is the blog that Fink built – and the Grizzly Telekaster he built too – very very nice, with fairly detailed photos and build notes. More pictures here. (There’s a nice curly maple telecaster there too)

My Tri band colleague Phil & myself will be running an open mic session on Friday 24th April at The Park Head Hotel in Coundon – start time 8:30pm. This is an initial session to see how it goes – it may become a regular thing – probably monthly. We already know of quite a few musicians who are coming – if you want to hear some great acoustic music, or want to play acoustically in a supportive setting, come along – all styles of acoustic music welcome – or give me a shout for more details 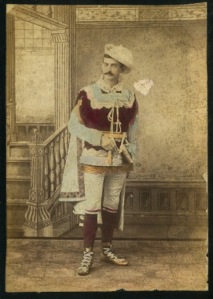 Great photos and a song by Stephen Foster that you can download here:

An unusual concept – there’s a video which shows it in use. Don’t think I would get away with it somehow.

The present invention, a ring-shaped pick (Fig.2)  designed to be worn on a middle finger, completely releases one’s hand and, as a result, enables one to use all the fingers or a conventional pick for a lead playing. Moreover, it’s very flexible shaft makes it long-lasting.